In 1970’s America, the first African-American officer in the Colorado Springs police department decided he was going to infiltrate and expose his local branch of the KKK. That man was Detective Ron Stallworth, and is incredibly portrayed by John David Washington. Joining him was his partner Det. Flip Zimmerman, portrayed by Adam Driver giving an equally fantastic performance. The two leads are amazingly likeable in a film filled with hatred, and their performances allow the audience to join them in their utter distaste for the events unfolding.

The comedy at the start of this film is great, with snappy quips and one-liners being shared between characters. However, once events begin unfolding with the members of the KKK, the laugh count drops dramatically. There are still humourous moments within these scenes, and most of it comes from making the KKK look like racist idiots and laughing at their expense, something the audience is happy to do. However, to call this film a comedy is no laughing matter. The subject matter is deeply unsettling and more like a horror film. It is not a bad thing that the jokes are far and few because it would cheapen the powerful imagery (such as KKK members firing guns at targets shaped like black slaves).

The hatred, coarse language and disgustingly racist themes that occur across the film are horrendous, powerful and deeply moving. Closing the film, narrative ends quite suddenly before footage of riots from 2017 play out. These videos prove that in 40 years, the racist opinions have not changed. While the ending was abrupt, the message left behind was horrifically powerful. It is also notable that several allusions to Trumps government are made during the film, including dialogue like “they’ll never elect a racist president” and “making America greater again”. Though the political message and Trumpian references did seem too forced in some places and detracted from the narrative, the film works wonders as a piece of propaganda.

Technically, the film features fantastic sound and production design, though some of the editing and voice dubbing felt sloppy. It is a shame that such a powerful film would be let down by these slightly less effective moments. I also felt the story was leading up to more than it ultimately did, and it was slightly disappointing when my expectations that had been built up by the film weren’t met. Though it’s based on a true story and ultimately can’t divert from the real story too much, the marketing of this film did also allude to something happening that didn’t, and I feel this would have been a fascinating set piece to play out (to avoid spoilers, I’ll write what this was under my star-rating).

Overall, BlacKkKlansman is a powerful statement about racism and discrimination. While the message is slightly too forced in places, Spike Lee has used a bizarre historical case to give weight to a serious contemporary issue, all while (rather thinly) disguising it as a comedy bio-drama.

The allusion that wasn’t fulfilled:

The main poster of the film showed Ron wearing the KKK uniform. While I guess this is a far-fetched thing to actually show in a biopic film, I thought the poster hinted that we would see him face to face with the Klan members, using their own masking uniform against them. An interesting dynamic, but I guess ultimately too ridiculous to include. 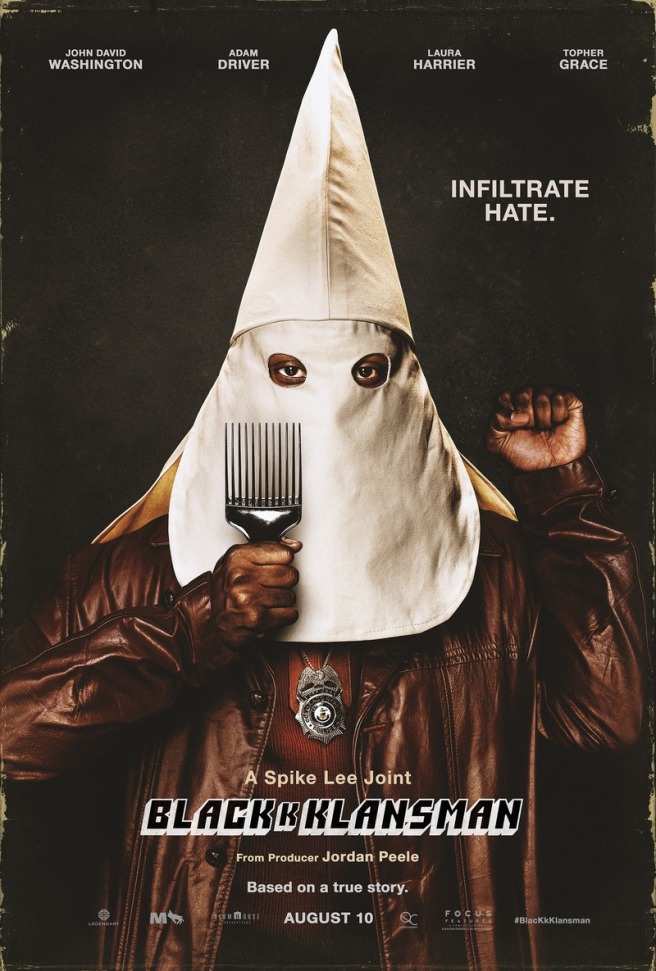