2017 was an exciting year in film. We’ve seen musicals, superheroes and war, and everything in between. At the start of the year, I was still working at my local ODEON Cinema, so was able to see quite a few films. As summer came along, I left there and sadly my cinema film viewing slowed slightly. There are many films I missed this year, and these include ‘Get Out’ (which was removed from Netflix just before I went to watch it), both ‘Thor: Ragnarok’ and ‘Spiderman: Homecoming’, and the Emma Stone/Steve Carrell comedy ‘Battle of The Sexes’.

Not only this, but there are some films I wish I hadn’t seen, and for that I need look no further than the shameful cash grab that was ‘Beauty and The Beast’. Terrible production design, identical story lines and Emma Watson’s horrific auto-tuned singing has still been named the highest grossing film of the year. I really, really hated this film, if its not obvious…

There are several great films I saw this year that didn’t quite make the top ten list, and these included Mindhorn, from the Mighty Boosh’s Julian Barratt, and The Lego Batman Movie, a hilarious film for both kids and adults, with fantastic pop-culture gags and a beautiful visual style. Unfortunately, it was just knocked off my list when I saw the new Jumanji film. Anyway, here are my top films of the year (that I saw).

At Number 10 is a film that got mixed reviews, but one that I really enjoyed. The Hitman’s Bodyguard. Yes, the story is a bit cliché and yes it was just an excuse to have Ryan Reynolds and Samuel L. Jackson work together. But the sheer fun of the film, with some great action sequences and fantastic comic performances from Reynolds and Jackson, made it more than worth its while.

Next up, another comedy; Jumanji: Welcome To The Jungle. I had such low expectations about this film at the start of the year. All the promotion looked naff, the name was kind of clunky, and I never really was a fan of the original. Well, just as the Wikipedia page says, Jumanji: Welcome To The Jungle was such a pleasant surprise! A fantastically funny and exciting film, with loads of hilarious lines and great special effects. What really won me over however were the fantastic performances from the main cast. Jack Black must be singled out for his hilarious interpretation of a teenage white-girl trapped inside a “fat middle aged man”.

At Number 8 is Star Wars: The Last Jedi. I’ve never counted myself as a Star Wars fanatic, but I thought this film was an amazing addition to the franchise. Visually, it is stunning, but then Star Wars have always been at the top of their game in terms of ground-breaking special effects. What really struck me about the film was its bravery. When Disney bought Star Wars in 2012, expected three films that would be awful, pandering and childish, and though I enjoyed The Force Awakens, it was clear that Disney played it safe with that one, almost remaking A New Hope. With The Last Jedi however, I found the much darker tone, mixed with the huge plot twists that will leave a massive impact on the franchise thoroughly enjoyable.

At number 7, Kingsman: The Golden Circle. I’m probably bias because I was at the premiere, and because I was such a huge fan of the first one, but I thought The Golden Circle was a fantastic expansion to the Kingsman universe. Matthew Vaughn has been quoted saying that “in film, fun seems to be a bad word” and this film proved it. The film had major problems, both thematically and plot wise, but it never took itself seriously and I had such a laugh watching it. Again, you can read my full review of it here. 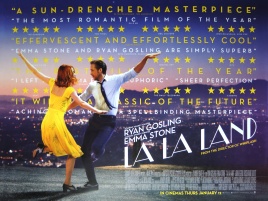 Following on from this we find La La Land. I’ve heard mixed things from my friends about this film, it seems to be the marmite film of the year. For me, I thought it was an absolute joy. The cinematography is sublime, the performances from Emma Stone and Ryan Gosling are fantastic, and I’ll be damned if the soundtrack/score isn’t the catchiest one of the year! 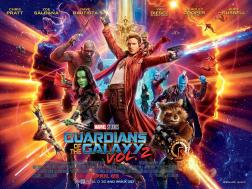 At Number 5, its Guardians of The Galaxy Vol. 2. What a film! I’m not sure why, but for some reason, I didn’t really enjoy the first Guardians film on my first viewing. I thought it was good, but I never saw why it was ground-breaking. I have since re-watched it and completely changed my mind, but I honestly think Vol. 2 was better than the first. The songs, the style, the colour and the humour all shine even brighter here, and the end result is so so great.

Next on the list is Kong: Skull Island. It showed cinemagoers how great big monster films can be. It was clear that this film was a blockbuster film directed by an indie director, rather than a blockbuster by a blockbuster director. Jordan Voight Roberts delivered a film that was stylish and exciting, while never getting overwhelmed by the CGI (take a lesson from this Michael Bay). Shocking twists, incredible special effects and a fantastic score and soundtrack all contributed to a fantastic film, and one of the best blockbusters this year. (you can read my full review of it here)

My third favourite film of the year is The Disaster Artist. As a budding film maker, I found this film to have such a strong message behind it. Making a film about The Room (the best worst film ever made) was a tough job, but James Franco gave the film such heart and humour that you can’t help but respect the strange man that is Tommy Wiseau. A truly enjoyable and heart-warmingly funny film.

At number two, and only just in second place, is the cinematic masterpiece that is Dunkirk. Christopher Nolan is a filmmaking God. He knows exactly what he’s doing and makes the smartest blockbusters around. I was slightly let down by Interstellar, which I felt Nolan went too far in trying to push the audience. What a joy then to see everything totally stripped back for Dunkirk. Everything about this was so simple and so stunningly amazing. The sound design, where everything is just slightly too loud; the huge practical effects, Hans Zimmer unbelievably tense score. It all culminates in something truly awe-inspiring.

And Number One, my film of the year. Surprise Surprise, it’s Baby Driver! Everyone knows how much I love Edgar Wright, and Baby Driver was simply perfect. Beautiful cinematography, incredible editing, exciting set-pieces and a stellar soundtrack made it an utterly thrilling action-musical, and one that proves once again that Edgar Wright is a master of his craft. (full review here)

So there we are, my top ten films of 2017. Looking to the future, there are several films coming out next year I am very excited about, and these include Early Man, Mission Impossible 6, Avengers: Infinity War, Isle of Dogs, Jurassic World: Fallen Kingdom, Deadpool 2 and Holmes and Watson. I am hopeful Fantastic Beasts 2 will improve on the awful (in my opinion) first instalment, and I’m unsure as to the quality of Oceans 8 and Mary Poppins Returns. I guess we’ll just have to wait and see… Happy New Year Everyone!